A group of intrepid OLLI adventurers recently traveled to the Canadian Rockies on an amazing trip sponsored by OLLI University Park through Grand Circle Travel. Five members from York, fondly known as the “York Five,” joined 35 University Park members/friends for a grand fourteen-day tour, starting in Calgary, Alberta, with stops in Banff, Jasper, Kamloops, and Kelowna, before finishing in the bustling city of Vancouver, British Columbia. A total of nearly 1,000 miles on coach!

Along the way, we discovered some of nature’s most stunning and beautiful views as we journeyed from the flat prairies of Alberta’s “cowboy country” through the dramatic Rocky Mountains to the crystal blue-green lakes, falls, flowing rivers, and glaciers! The landscapes were breathtaking at each turn. Embarking on an exciting ride onto the Athabasca Glacier in the Ice Explorer snowcoach and then walking on an actual glacier was beyond magical!

And in true OLLI fashion, besides having so much fun and meeting some really nice and friendly people, we actually learned so many new things. The “Learning and Discovery” talks were sprinkled into our itinerary along the way with local experts speaking about the land, its people, businesses, cultures, and controversial topics.

There is so much more to share, but the trip truly was the “best” of the Rockies!  I enjoyed it so much more with my York traveling companions — my husband, Rob Campbell, Wayne and Jayne Lee, and Susan Craver — and the 35 “new friends” from University Park and beyond. Hope to see you again soon on another adventure! And thanks to OLLI for organizing this trip and opening it up to York members. Perhaps this will spark all to consider other OLLI trips that are offered in the coming years. This one indeed leaves us with many warm and happy memories!

Learn more about travel opportunities through OLLI at Penn State. 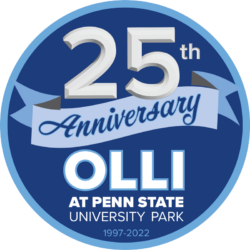